David Schribman recently writing in the Pittsburg-Post Gazette shared these thoughts about the 50th anniversary of the Martin Luther King Jr. “I Have a Dream” speech.
.

With a black man in the White House, has Martin Luther King’s dream been realized? …
The civil rights movement, lasting roughly from 1955 to 1968 but with antecedents reaching far earlier and with effects cascading far later, produced a profound transformation — and has itself experienced just as profound a transformation.
.
It has been transformed in American memory from a much-reviled outsiders’ movement making what seemed to be extremist demands into a much-beloved popular uprising that almost seamlessly extended the logic of American values to a broader base of the nation. Many of its roots were in the effort to open the schoolhouse doors, and today its goals are so widely embraced that schools are closed in the middle of each January to celebrate its aspirations.
.
It began as a terrifying assault on broad, commonplace practices, led by the bold and the brave, steeped in civil disobedience, prosecuted on buses and at lunch counters and at the violent end of the fire hoses of the powerful. It evolved in memory into a proud, broad-based surge of honor whose principal genius is celebrated with a holiday and a Washington monument. Abraham Lincoln today has only the monument, no longer the holiday.

In history’s long view, Lincoln and King — one white and one black, one a 19th-century martyr and the other a 20th-century one — might be remembered as relay runners in the same long-distance race. Indeed, long before it was the backdrop for King’s speech, Lincoln’s memorial, its Doric columns symbolizing ancient and eternal values, was the backdrop of Marian Anderson’s contralto in a celebrated 1939 episode of defiance and determination to the strains of “My Country, ‘Tis of Thee.”

In the pitch-perfect symmetry afforded by the decimal system, we mark the 50th anniversary of King’s dream in the same year as the 150th anniversary of those other hinges of history, the Emancipation Proclamation and Battle of Gettysburg, and of the only other speech in all of American history that changed the American character, the Gettysburg Address, whose anniversary is but a dozen weeks away.

.
But before the self-congratulation becomes too hearty, let’s remember that this is not a “mission accomplished” moment and that all this was prompted by one of the greatest injustices in all of human history, a stain on the American story that begs a different question, still without an answer: Why did it take so long?
It is difficult to remember today, when that march is a monument in memory — cast in stone, you might say, like the Lincoln and King memorials — that the genius of it all wasn’t only in the careful planning of A. Philip Randolph and Bayard Rustin. It also grew out of the improvisation prompted by Mahalia Jackson, once so well known that it wasn’t necessary to identify her as the Queen of Gospel.

.
King was deep into his oration when Jackson, who had sung at a rally to raise money for the Montgomery bus boycott of 1956, worried that he was losing his forward momentum. She urged him: Tell them about the dream, Martin.

.
King had given his “dream” riff many times — it wasn’t a new element of his repertoire when he stood on the Lincoln Memorial steps. Then again, Lincoln’s speech at Gettysburg, with its biblical allusions and rhythms, wasn’t a complete original either. The result wasn’t only history. It changed history.

It was the first time I ever prayed with my face touching the earth…and the first time I have ever had a prayer interrupted by a President of the United States. I lay prostrate on the green grass surrounding the Washington Monument, praying with ten other men in a tight circle, and a half million men all along the Washington Mall. It was October 4, 1997, a Saturday afternoon, and the Presidential helicopter with William Jefferson Clinton aboard, had just powered over our prayer huddle flying barely higher than the Washington Monument peak as if by governmental mandate. 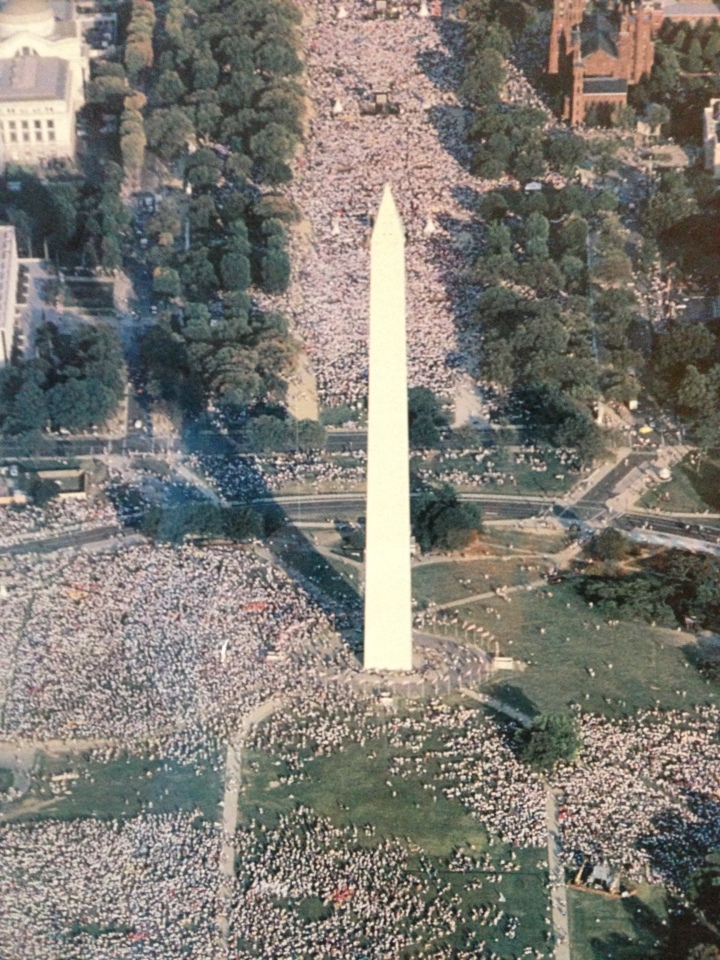 As dusk neared, I looked behind where we sat, and I noticed the reflecting pool leading to the Lincoln Memorial. This was near the place Martin Luther King stood and delivered in his sing-song style perhaps the greatest speech I’ve ever heard, the I Have a Dream speech of the civil rights…