A good friend of mine, Steve Osborn, once referred to me as his summertime friend. He attended Oklahoma University and I attended Harding University. As college undergraduates, we mostly saw each other in the summer. We were connected by our faith, growing up together on the basketball court, at the church house, and graduating from College High School, across town from our rival school, Sooner High. We came home each summer to reconnect, live in our parents homes if they hadn’t sublet our bedrooms, and to work at jobs and church camp and do crazy stuff together. Steve’s term, summertime friend, makes me think about another friend from my college era, a friend who could use your prayers right now.

Jeff Lowry is from the other side of town and graduated from Sooner High, where he played football with his good friend, J.W. Lively. Both of these strapping lads would go on to compete on the gridiron at Abilene Christian University. Jeff and I worked for my father’s construction company during those days of summer shoveling ditches, tying steel, setting forms, and picking up trash. Roy Johnston was our foreman. He drove a Massey Ferguson tractor and gave us Redman Chewing Tobacco in 100 degree heat which cured my tobacco curiosity and Roy often said after completing a task, “That’s good enough for the girls we go with.” I’m unsure if that is an insult to girls or macho self-deprecation, but anyway, for two college boys, we thought it funny and said it repeatedly after completing a task.

It was during that summer of invincibility that we used the night to restore our chill, to bring us back to earth, as the sun shimmered off our backs and we yearned for the sun to sink below the western horizon of Circle Mountain. Late in the evening, we lay on our backs on a still warm driveway staring at the stars and making them disappear behind our thumb. In the darkness we escaped from the intense heat, the sweat and grime washed away by a cold shower and an evening breeze, while the Milky Way became our muse.

Jeff brought me out that summer in many ways. He was 6’4’ to my 5’10”, football machismo to my golfer reserved, bold to my timid, the say what you think to my keep quiet lest people know you are ignorant. And so we became friends that summer.

We counseled campers at Osage Christian Camp, played softball in a church league, and once we took my Dad’s Lincoln on a quadruple date to Steak & Ale and then to the Muppet Movie. It’s the only time I’ve ever been on a quadruple date in one car and we did it just to say we did it. That’s what Jeff did to me, he made me try things just because, well…“Why not?”

Once we were driving to Tulsa and decided to stop at Roy Clark’s home and ring the doorbell. We drove through the fancy gates and walked to the front door as if we had an idea what we were doing. Nobody answered the door and we weren’t sure what we should say when Roy Clark opened the door and welcomed us inside for a friendly chat. We struck out but at least we tried and we did it because we were stupidly young and it gave us an adrenaline rush.

We once drove to the Will Rogers Rodeo in Vinita, OK and as we entered the grandstand and searched for seats, people stared at us with knowing disapproval because we were city slickers wearing Tony Lama boots who hadn’t a clue how to act at a rodeo. When do we cheer? Maybe we were wearing the wrong boots? Anyway, we stayed all of thirty minutes and drove back home.

We lived on the outskirts of town, where light pollution was minimal, and the stars were as numerous as beach sand. We knew a little about constellations, and searched out the Big and Little Dipper and stared at the enormity of The Milky Way canopied over our heads on those summer nights as we laid back on my driveway, hands clasped behind our heads in the darkness, staring at the wonder of what we could see but not fathom. And during those reflective moments we talked like you talk when you are 19 and your entire universe and life is in front of you. We talked about girls. We talked about careers. We talked about cars. We talked about falling in love and getting married. We solved mysteries, invented grand machines, and changed the world under the stars that summer.

I went to see Jeff last Saturday and I sat next to his bed and we talked about those days and about the days to come. I told him my son is getting married on September 17, which is Jeff’s birthday. Jeff will be 55 years old that day. Friends and family were coming into the room every few minutes and Jeff spoke to them and hugged them with affection and charm just as he always has. Jeff is fighting the good fight, just as he always has, with good spirits and great courage. 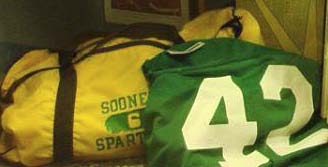 There is a Sooner Spartan high school football jersey hung on the wall. Green and gold, the arch rival, the high school on the other side of town from the one I attended. And I realized how different Jeff and I are and yet we are same. Friends who haven’t stayed in touch a lot over the years, as guys are often wont to do. But still friends from our days of feeling invincible, yet insignificantly tiny compared to the Milky Way.

Jeff is no longer his college playing weight of 250 pounds, and I looked at the green and gold football jersey on the wall and thought that it would swallow him up now. But Jeff isn’t getting smaller in an important sense, he’s getting bigger, closer to the stars that we stared at in the summer of our youth.

Not everything worked out as planned on our driveway in the evenings that summer. Does it ever? But I still see my friend Jeff fighting, shoveling ditches, driving his legs off the line into the opposing player, working up a sweat just to sit up in bed now, battling, doing whatever it takes. Jeff never has backed down from a battle, or from a door with the unknown behind it, he just goes ahead and rings the doorbell.  For Jeff, this is just a temporary set back, a skirmish that takes him away from stargazing.

Someday Jeff will find a better rodeo and knock on a door even more famous than Roy Clark’s and all the wonder of staring at the stars from our driveway will wash over him like the soft glow of a late autumn day on the gridiron when the game is won and all you hear is the noise of an entire stadium, a crowd standing and cheering because now you are one of those points of light that we stared at those summer nights, you are a star.

“…everyone who asks receives, and he who seeks finds, and to him who knocks it will be opened.”  Matthew 7:8

9 thoughts on “Our Summer of Invincibility”