I’m learning how to sing the national anthem out loud, but it doesn’t come naturally to me. And I always feel unresolved at the end of verse one because…well, it ends with a question and it’s not my favorite song, but hear me out. We all have to sing the song we know best.

My wife certainly does. She is a Wurlitzer jukebox from 1975, but she doesn’t require coins, only a phrase to set the platter turning.

or, “Daddy was a cop,” brings a burst of “on the east side of Chicago, back in the USA, back in the good ole days.”

Wouldn’t it be great if our country sang the Star-Spangled Banner like my wife. The PA announcer would say, “Oh say can you see…”, and the crowd would burst out in spontaneous electric energy, “by the dawns early light.”

Perhaps it’s an acquired taste. However, I’ve been listening to it since the 1968 Olympics and it still sounds like a rich man’s drinking song from a London coffee house, with a range of an octave and a half that is a stretch for Julie Andrews, not to mention baseball fans from the Bronx who have a range of two notes…E & C#…”Let’s go Yankees”

Speaking of the anthem, Justice Ruth Bader Ginsburg, never shy with an opinion, said “it’s really dumb” for San Francisco 49ers quarterback Colin Kaepernick and others to refuse to stand for the national anthem. Colin Kaepernick sans helmet, kneeling during the National Anthem reminds me of my junior year in high school. For some odd reason, I got an afro and my hair looked like Kaepernick’s. I did not like the style, not that there’s anything wrong with that style, but it wasn’t me. And while I was jealous of my African-American buddies singing Al Green falsetto on the bus coming home from basketball games, I was a phony, an imposter, a white guy trying to sing Al Green without any range or context.

So I’m wondering if Justice Ginsburg is hyper-critical. Maybe she is like me with the afro, unable to reach the Al Green high notes. After all, she is as different as one can be from Mr. Kaepernick. She’s a woman, very short, very Jewish, regally old, and she isn’t a particularly good quarterback. Although, I can picture her singing some Al Green, because doesn’t everyone sing some Al Green?

Maybe Mr. Kaepernick could lip sync Al Green while kneeling as the anthem plays, or to be more lyrical and poetic, America the Beautiful, like Ray Charles:

Ya know…I wish I had someone to help me sing this. Back when I was in school we sang it like this…

O beautiful for spacious skies, For amber waves of grain, For purple mountain majesties, Above the fruited plain!

Recently Karen and I were driving through Wisconsin farmland and I spontaneously began singing America the Beautiful, like Ray Charles, wearing sunglasses driving in pastoral splendor, because after all, well, my middle name is Ray. I’ve always loved that song. It’s not ambivalent, there aren’t any question marks in it.

I’ve often wondered why we don’t sing America the Beautiful more often in public gatherings, rather than our official national anthem which ends the first verse with the question, “Oh say, does that star spangled banner yet wave, o’er the land of the free and the home of the brave?”

On June 14, 1777, the Continental Congress passed an act establishing an official flag. The resolution stated: “Resolved, that the flag of the United States be thirteen stripes, alternate red and white; that the union be thirteen stars, white in a blue field, representing a new constellation.” 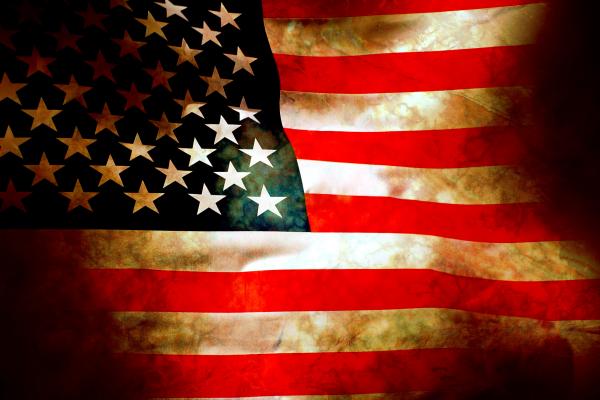 Today the flag consists of 13 horizontal stripes, seven red alternating with six white. The stripes represent the original 13 Colonies and the stars represent the 50 states of the Union.

Does that star spangled banner still wave o’er this land? I did a little research.

Sites where the U.S. flag is flown 24 hours a day.

It is still flying. But is it flying everywhere?

Perhaps a song with an unresolved question isn’t such a bad idea after all.

White: We have the right to be righteous, to call those around us to a higher standard of conduct and civility.

Blue: We have the right to endure, to persevere, to seek justice, to live powerfully and nobly.

So when the jukebox fires up the anthem, resolve to sing aloud the question, and stand for what you believe, and resolve to quietly kneel against those things that you abhor, which in the end is one of the answers to the question. Courage, purity, and justice, is a song and we all have the duty to sing an answer to the question from our own jukebox…Justice Ginsburg, Colin Kaepernick, you, me…or the answer to the question may be no, the flag doesn’t wave, and our rights become simply the rights of those standing versus the rights of those kneeling, in a land where an anthem is sung with one verse only, ending in a question that never gets answered.