I was five years old as I headed across the undulating back lawns along the west side of Mission road headed to my kindergarten class at Limestone school. The smothering late August Oklahoma heat of 1964 dictated my dress, white riveted red-tab Levi’s and a red mock v-neck shirt. My head was shaved tight and I was fearfully instilled with a dread of barking dogs that lived along the east side of Mission road and so my route circumvented my worst fears as I made my way to the Nowata road school crossing. I would later take a more direct route to school after conquering my barking dog fears and have calculated that I made that two block stroll to school and back home 2,800 times. Which means that I’ve breezed through the stone lined hallways of Limestone School roughly 10,000 times. 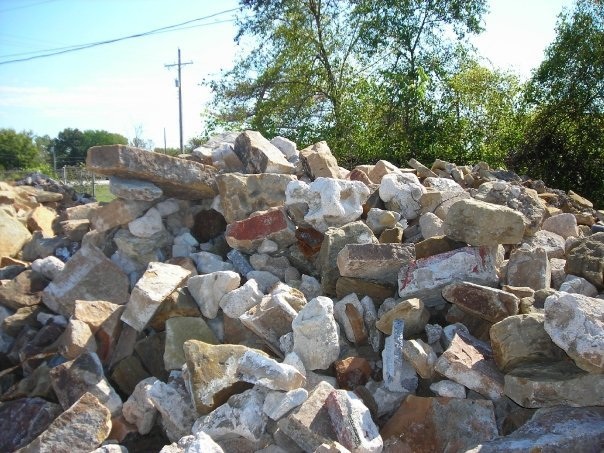 They demolished Limestone School in 2008 to make way for Armstrong Bank. The namesake native limestone rock was quickly reduced from structure to rubble creating pilgrimages to the debris pile by former students intent on collecting unwieldy keepsake paperweights.

I can remember all seven of my teachers from kindergarten through sixth grade. My 1st grade teacher was Mrs. Mattie Mayberry who inaugurated the WPA built version of Limestone school built in 1939 as sole teacher of that small school on the south edge of Bartlesville, OK. Mattie was pretty hard on me at times and I thought her to be older than the fossils I found etched into the limestone rock in the schoolyard. She once told me to, “Close your mouth Brent or a bug will fly down your throat.” She was a prophet…it happened one evening in the churchyard and I thought of her as I felt the winged creature hit the back of my gullet as I reflexively swallowed a moth whole.