One of the most memorable rounds of golf I’ve ever played, I played angry. And it came on the heels of an exchange with a man we called Sweet, even though decorum and his given name, Edward Muir Sweet, demanded we call him, Mr. Sweet. The elimination of the honorary title, Mr., was not an insult, and the one syllable surname rolled easily off our tongues as an endearment that bridged the years separating us. He didn’t demand the formality, nor did he demand we call him by the name most used to greet him, Tid. He gave us license, and so he was Sweet, a friend, from a generation we sometimes suspected. It was after all the age of Watergate. The exchange happened between the morning and afternoon rounds of the Russell Lipe tournament hosted by Sooner High School and College High School. The year was 1977 and I had just walked off the 18th green hotter than Bobby Knight in a chair-free room at a referee convention. I’ve often wondered about the role of people and emotions in the games we play…how emotions sometimes elevate us and other times make us lose our minds and our games. 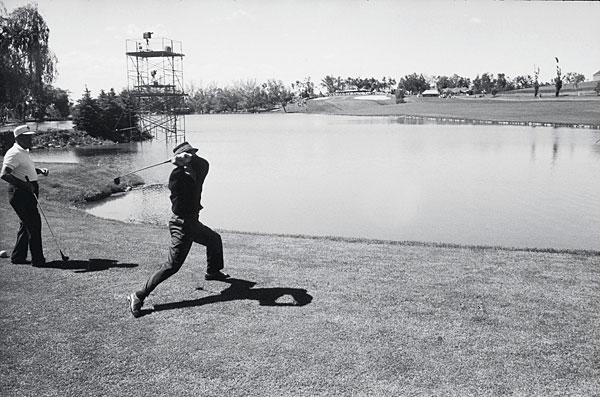 Pictured is Tommy “Thunder” Bolt who won the U.S. Open at Southern Hills in 1958, but was perhaps more famous for his club throwing temper.

After storming off the 18th green, I walked into the pro shop at Adams Golf Club and approached the counter as Tid Sweet watched me walking towards his position of command and control. Sweet had a salt and pepper military flat top and horn rim glasses, along with a graceful bearing and natural rapport with the kids who played golf in his domain as golf shop manager. However, I was angry and wasn’t looking to chat. I said to Sweet, “Give me a sleeve of Titleist, a ham and cheese and a Coke.” Noticing my countenance, Sweet asked me, “How did you play this morning? You doing ok?”

He was always the gentleman although any abuse we heaped on him was returned two-fold. Sweet took time for putting contests with junior golfers and the putting clock challenge was often a masquerade for a counseling session and the conversations that often occurred between an older, wiser man, and a youngster full of bravado masking post-pubescent insecurity. And so we were challenged to not only beat Sweet in a putting contest but to match wits with someone who had seen a lot more of the world than we had, a transfusion of life from the wise to the rose-cheeked innocent in the midst of rolling golf balls on a broad expanse of tightly mown green grass. Sweet wanted to know how I was doing. I replied with one word. “79”

Golf is a game that reveals you and your score always speaks the truth. We often repeated this cliche’, “They don’t ask how, just how many.” Style matters, but in the end, only the score rings true. And so golfers wrestle the demons of self-expectation often reverting to their own statistical mean. Our self-expectation is a subliminal weakness when we are well, a visible strength when we are playing poorly. We are weakest when playing well although often blind to our softness. Our strongest moments often come in the midst of our poor play. Like the bible says, we find strength in our weakness. Sometimes that strength manifests itself in outward emotion, even anger.

I remember the first time I heard the term, “I can’t stand prosperity.” It was in the context of playing with a buddy and he was four under par and had just pulled hooked his second shot on a par five into the creek. “No cursing, no club throwing…just, “I can’t stand prosperity.” Is wealth difficult to bear? Apparently going further under par than your own sense of competitive skill is rectified by the gods of golf. We seem to have little control over that. It’s a self-regulated mechanism, returning you to a zone of comfort not unlike a thermostat that senses when you’ve gone too hot…or too cold.

Great golfers, indeed great athletes, have shoved the needle of expectation higher than anyone else. In golf, the nomenclature is “go deep” or “go low” or “unconscious.” But once you begin to go low, how do you keep your foot on the pedal. Who has the competitive nerve, the brass tenacity to go lower. A 62 somehow makes one a golfing genius. But there is baggage. There are dues to pay and few can pay them. Many have the physical talent to play great golf, but to maintain a level of excellence throughout a four-hour round of golf, that’s brave, that’s crossing into the realm of faith and belief that you are better than those around you. Maybe even better than…yourself?

Prosperity is difficult to bear indeed and yes, it does demand a huge dose of athletic arrogance and superiority. It’s not something one can fake. It has to bear some semblance of reality grounded in performance, grounded in the weight of expectation in not only your own mind but in the mind of your competitors.

It’s almost like accepting grace with gusto, without apology. Understanding that you are the one most deserving and worthy of excellence, as if by birthright. But is anger indicative of this birthright?

As I walked out of the golf shop that April day after firing a lousy 79, I told Sweet, “I’m shooting a 66 this afternoon.” Sweet just looked at me like I was a stupid kid who should just keep his mouth shut and play. But as I walked out the door, hot, angry, determined, I muttered, “Just watch, you’ll see,” and I pushed open the glass door, cleats clattering on the asphalt path to the first tee.

I parred the first hole, a short par four. Then something happened that made me more agitated…or motivated me…I’m still not sure which. My coach, Ken Bruno, was playing the adjacent eighth hole and as I walked off the second tee box walking after my tee ball, bag lashed against my back, eyes scanning the ground a step ahead, Coach said something to me. He rarely spoke to me while I was playing, but this time he did. “Keep your dauber up,” he yelled over at me noticing my head down. Maybe he had heard about my 79. I had no idea what a dauber was but it annoyed me. I already had my mind set on what was going to happen and I thought his well-intentioned admonition might take the edge off my anger. I didn’t want to keep my dauber up. I wanted to punch someone in the dauber. So I walked on. I birdied hole two. I came to the eighteenth tee five under par. All I needed was to carry the creek 220 yards out, in the fairway, then a sand wedge and a putt for 66. I missed a twenty footer and settled for par and a 67, winning the tournament. Did anger aid my performance? Or had my expectational barometer simply self-corrected? Why does anger cause some athletes to focus and others to lose their minds?

Bob Knight, the legendary Army, Indiana and Texas Tech basketball coach writes in his recent book, The Power of Negative Thinking, “recognizing, addressing, and removing obstacles to winning,” is the formula for success on the basketball court…and in life. For Mr. Knight that includes preparation and the elimination of mistakes. Victory, he writes, “favors the team making the fewest mistakes. Coach Knight won three NCAA basketball championships so it’s difficult to quibble with his coaching style, a mix of berating players, throwing chairs and identifying weaknesses for the purpose of correction, like a drill sergeant. 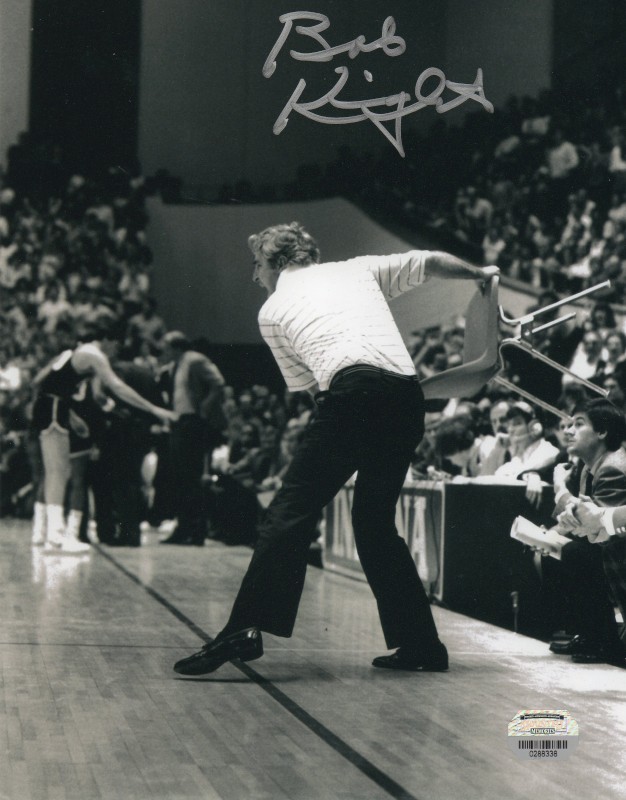 Scott Nagy, the head basketball coach for the South Dakota State Jackrabbits is using another coaching paradigm with this team slogan, “Play like you are loved,”. According to The New York Times quoting Nagy, during the NCAA basketball tournament this past March, “We don’t run around like we’re in a lovey-dovey commune, but what I want our guys to know is that family, teammates, and coaches love them and that you don’t have to perform in order to know that you are loved.” Coach Nagy’s team speech before the conference championship game ended with this: “I want you to play like you’re loved. Play freely. Love isn’t dependent on your performance. No matter how you play, you are loved. Play with that in mind.” That’s not exactly the same as a coach who insults your manhood by telling you your jockstrap is floral pink because you won’t step up and take a charge.

Play like you are loved. Play angry. Play by removing the negatives. All three can be valid perspectives, but one aspect shared by each is this: Play freely. Each paradigm of competitive style calls for the freedom to play. Freedom from self-loathing…freedom from stiff conscious analysis…freedom from obstacles.

Each perspective allows an athlete to “let it all hang out”. In a sense we get out of our own way and let our subconscious rule our play. There are no limits, there are no obstacles, there is no doubt about our worthiness to perform amazingly well…to not only “stand prosperity” but to revel in our good performance.

I have no idea if any of this is true or not, because I’m still trying to figure out how to play optimally. Perhaps great golf is more than a 67. Could it be about being a gentleman, granting and accepting a gracious spirit of friendship, cultivating integrity in the midst of a win-at-all-cost culture, along with being a good companion in the midst of a four-hour walk on a verdant fairway? At fifty-three years of age, I’ve given up on playing angry. No longer do I slam wedges onto hardpan snapping the shaft in white-hot anger at a missed shot. As for the power of negative thinking, life’s too short to think about removing all my obstacles. So I’m choosing to play like I’m loved. It seems to make more sense to me now. Indeed, it’s Sweet to play like you are loved. I’m grateful to Mr. Edward Muir (Tid) Sweet who taught me many years ago to bear down and beat your opponent on the putting green along with how to play like you are loved…even if I didn’t realize it at the time.