My son spent every waking moment of 1996 as a three-year old child repeating one word, “Why?” Why are there big red balls on some electric power lines and why can’t he wear his socks according to thickness instead of color and why do arrows on signs point up into the heavens where cars can’t go anyway? 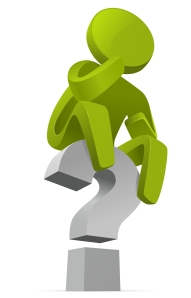 Since I miss my son who is in Germany, I’ve been collecting why questions in his honor. I don’t really have any answers, but here are some of my favorites questions:

What do you say when someone says you’re in denial, but you’re not?

How does a shepherd count his flock without falling asleep?

Why did Superman wear his briefs on the outside of his tights?

Have you ever thought what life would be like if your name was Anonymous?

If it is a 50 mph per hour wind and you drive your car at 50 mph downwind, if you stick your head outside would you feel the wind?

Why do they call them “Animal Crackers”…aren’t they cookies?

How do you throw away a garbage can?

If the universe is expanding, what is it expanding into?

If you’re caught “between a rock and a hard place”, is the rock not hard?

If an anarchist group attained political power, would they by principle have to dissolve their own government?

If you decide that you’re indecisive, which one are you?

Why do they call it your “bottom”, when it’s really in the middle of your body?

Why do they call it “head over heels in love” If our head is always over our heels?

Why is the name of the phobia for the fear of long words Hippopotomonstrosesquippedaliophobia?

Why would superman want to leap over the tallest building in a single bound if he can fly?

How fast do hotcakes sell?

Why do drugstores make the sick walk all the way to the back of the store to get their prescriptions while healthy people can buy cigarettes at the front?

Why can’t women put on mascara with their mouth closed?

Why is the time of day with the slowest traffic called rush hour?

Who was the first person to look at a cow and say, “I think I’ll squeeze these dangly things here, and drink what ever comes out”?

What do people in China call their good plates?

If the professor on Gilligan’s Island can make a radio out of coconut, why can’t he fix a hole in a boat?

Why do people never say “it’s only a game” when they’re winning?

Are zebras black with white stripes, or white with black stripes?

Is a sleeping bag a nap sack?

Have you ever wondered why Trix are only for kids?

Why do they call it “getting your dog fixed” if afterwards it doesn’t work anymore?

If Wile Coyote had enough money for all that Acme stuff, why didn’t he just buy dinner?

What if the hokey-pokey really is what it’s all about?

If Americans throw rice at weddings, do the Chinese throw hamburgers?

Is Disney world the only people trap operated by a mouse?

Why do the ABC song, Twinkle Twinkle Little Star, and Baa Baa Black Sheep all have the same tune?

What would Geronimo say if he jumped out of an airplane?

Why does Donald Duck wear a towel when he comes out of the shower, when he doesn’t usually wear any pants?

How does the guy who drives the snowplow get to work in the mornings?

How many people thought of the Post-It note before it was invented but just didn’t have anything to jot it down on?

If Jimmy cracks corn and no one cares, why does he keep doing it?

If you play a blank tape at full volume and have a mime for a neighbor, will he complain?

Shouldn’t it be some things in moderation?

Shouldn’t there be a shorter word for “monosyllabic”?

What is the speed of dark?

When you’re sending someone styrofoam, what do you pack it in?

Why aren’t there bulletproof pants?

Why do we sing ‘Take me out to the ball game’, when we are already there?

Why don’t you ever hear about gruntled employees?

Why is it so hard to remember how to spell MNEMONIC?

Why isn’t phonetic spelled the way it sounds?

Why isn’t there mouse-flavored cat food?

Would a fly without wings be called a walk?

One thought on “Questions without Answers”

One response to “Questions without Answers”