Karen and I were driving through Wisconsin farmland a couple of years ago, and I was overcome by pastoral splendor although it may have been too many cheese curds. I began singing America the Beautiful, like Ray Charles, because after all, my middle name is Ray. I’ve always loved that song. It’s not ambivalent, it resolves, it is full of color and emotion, purple mountains, and amber waving grain, skies dripping with grace.

I think it’s the colors in the song that I love. The decorator in our construction company selects colors from thousands of choices. Sometimes she asks me what I think, just to make me feel important. It gives me a jolt of stylistic arrogance, as if I know something about color.

But do I really?

During my junior year in high school, for some odd reason, I got an Afro. I did not like it, not that there’s anything wrong with that style, but it wasn’t me. And while I was jealous of my African-American buddies singing Al Green falsetto on the bus coming home from basketball games, I was a phony, an imposter, a white guy trying to sing Al Green without any range or context.

But doesn’t everyone sing some Al Green? At some point in their life…

whether times are good or bad, happy or sad yeaaaa

Speaking of good times and yeaaaa moments…my daughter took me to McKay Books in Nashville last week. Since I’m a bit of a bibliophile, I was blown away by this store that was closer to the musty public library of my youth than a bookstore. Without remorse, I binged, buying thirty books at an average price of $1.50 per. 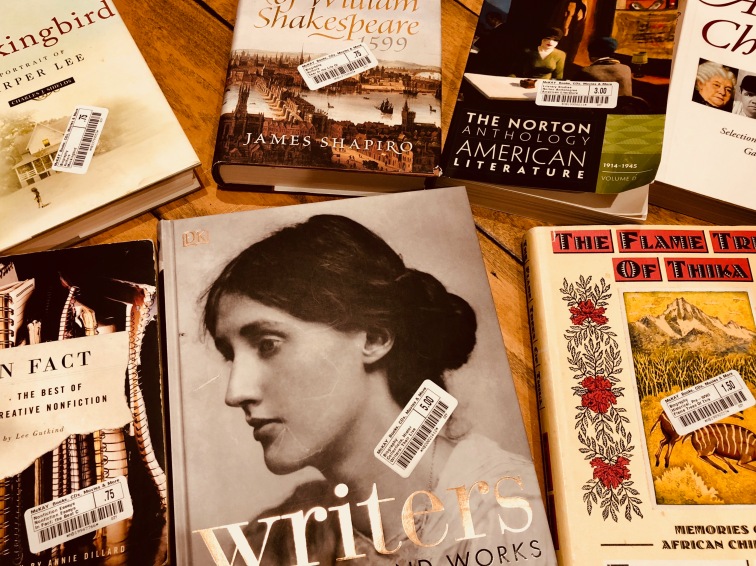 I’ve always been fascinated by the writers and literature that bridged World War I & World War II. So when I saw this astounding bargain, the Norton Anthology of American Literature-1914-1945—-$3.00, I put it in my cart.

Why is it interesting?

Because there are legendary white male writers of that age, William Faulkner, F. Scott Fitzgerald, John Steinbeck, Ernest Hemingway, and T.S. Eliot. But there also are emerging writers finally given a voice, Edith Wharton, Zora Neale Hurston, Langston Hughes, and others who articulate ideas with a rich bias of perspective that I cannot fully fathom.

Last night I read Black Elk Speaks, John G. Neihardt’s 1932 interpretation of the Oglala Lakota Sioux, Nicholas Black Elk, telling the tale of his life through his son, Ben, while Neihardt’s daughters, Enid and Hilda acted as stenographers. Here are a few soundbites:

“Crazy Horse dreamed and went into the world where there is nothing but the spirits of all things. That is the real world that is behind this one, and everything we see here is something like a shadow from that one.”

“When a vision comes from the thunder beings of the west, it comes with terror like a thunderstorm; but when the storm of vision has passed, the world is greener and happier; for wherever the truth of vision comes upon the world, it is like a rain. The world, you see, is happier after the terror of the storm.”

The Negro Speaks of Rivers

I’ve known rivers:
I’ve known rivers ancient as the world and older than the flow of human blood in human veins.
My soul has grown deep like the rivers.
I bathed in the Euphrates when dawns were young.
I built my hut near the Congo and it lulled me to sleep.
I looked upon the Nile and raised the pyramids above it.
I heard the singing of the Mississippi when Abe Lincoln went down to New Orleans, and I’ve seen its muddy bosom turn all golden in the sunset.
I’ve known rivers:
Ancient, dusky rivers.
My soul has grown deep like the rivers.

My hair is gone and the Afro is no longer an option. But I can still sing like Ray Charles and Al Green. I’m singing America the Beautiful once again, steeped in amber, purple and dusky deep rivers. My soul deepens in the sun of that brilliant grace.

One thought on “Singing with Al Green”

One response to “Singing with Al Green”