My brother Greg mentioned that there are perhaps more moments of children and parents  having a catch these days. In my childhood, this would have been my sister or my dad with whom I had a catch. I hit my sister in the shin once with a fastball and she hasn’t tossed a baseball to me since. Greg and I scrambled to find a baseball and two mitts. We found a baseball but only one mitt, so our catch was a bit one-sided but still fun. Maybe this quarantine has brought “having a catch” back in vogue.

It turns out a quarantine was once trentino. After Black Death ripped through Europe, officials in what is now Croatia established a 30-day period called trentino for ships arriving from plague-affected areas. Cities later extended the isolation period from 30 to 40 days, and the term changed from trentino to quarantino—the root of the English word quarantine that we use today.

Many Biblical stories draw upon the number 40. Noah drifted in an ark 40 days, Moses fled Egypt for 40 years and was on Mount Sinai 40 days, the Exodus lasted 40 years, Jesus fasted 40 days…some theologians think that the number 40 represents change or a  time of preparing a person or people to make a fundamental change.

This hits home for me when I look at a picture my son shared of his home outside Norman, OK. The earth seems quieter these days, the sky bluer.

If you were teleported into this moment from one year prior, without knowing any current events and you took a walk about your neighborhood, what would you think? What has changed? My neighborhood seems more peaceful as I observe people walking dogs and children riding bikes. Is our collective human metabolism slower in this strange moment?

Some scientists believe our earth is much quieter since the advent of social distancing. This “quieter” Earth during protective self-quarantine has reduced the ambient seismic noise. Essentially, our jets, cars, voices, and the machinery of modern life has idled down to a soft hum as we travel less, gather less, and make less commotion.

Caroline Delbert writes in Popular Mechanics, about how seismologists are able to read seismic measurements with much more clarity since the world has gone on quarantine. The resulting stay at home quietude allows scientists to hear seismic noise louder and clearer than before, as if you were in a room with several conversations but now you only hear one person talking.

During quarantine, like a computer resetting or a river flushing itself of pollution, we rest and reset and revitalize, vegetation seems greener, the air perhaps is cleaner and brighter and the Earth is at rest for the first time in many years.

So, enjoy this strange time of sabbath rest, even if you are still hard at work, stop for a moment and listen to the joy of a quieter more restful historical moment…oh, did I mention the year? 20+20 is 40

Thanks to my friend Sheila Martin for sharing some of these thoughts in a text!

You know that your social isolation in a padded room with unlimited television has gone on too long when you have to resolve a jingle. For instance Liberdy, liberdy, liberdy…

Pause…liberdy. I know it’s misspelled. But that’s how it sounds and it matches the weirdness of an emu named LiMu and Doug with a key to the city bigger than his femur. The gecko is civil and emotionally balanced, Flo is obnoxious but occasionally funny, but a giant flightless bird and the guy who was president of his high school Key Club? I miss baseball…

Many have asked about my Dad and how he is doing. He is struggling. We appreciate your prayers. Greg Taylor is transitioning into the family building business and is writing a blog, 100 steps to building your home. He called the family patriarch, Terrel Taylor, and asked him his thoughts. Terrel’s response was less technical with more side stories rather than the tensile strength of concrete. Here is a picture of Dad from a time when he was just getting started in business collecting license plates. We think the year was circa 1940. 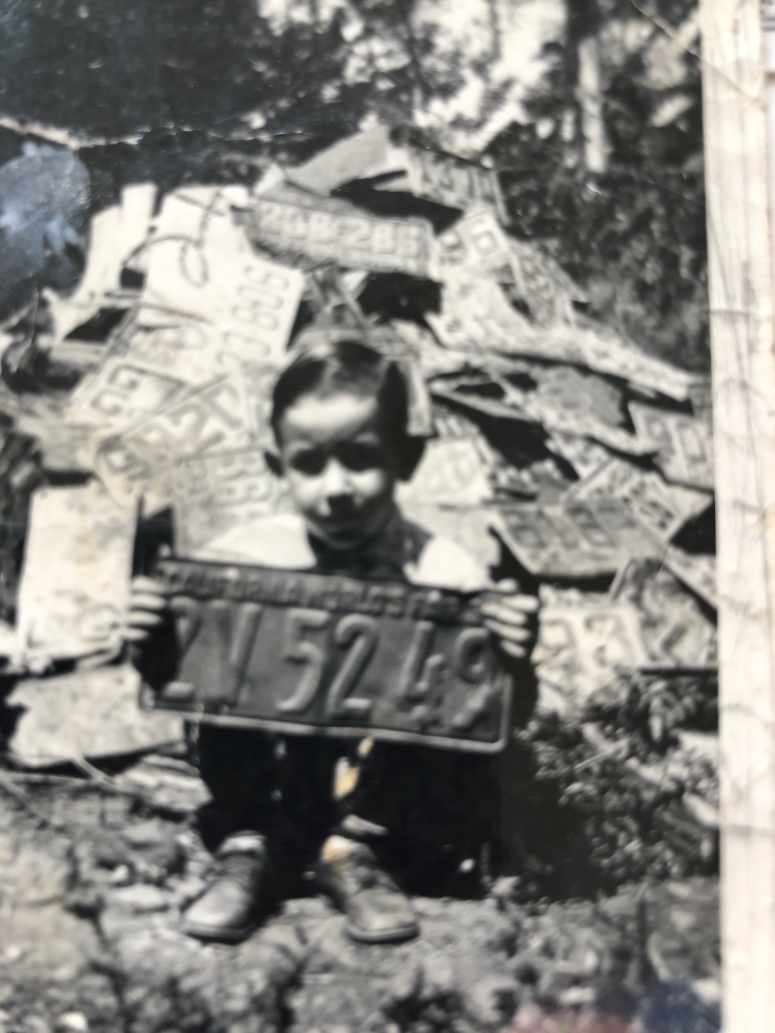 According to the Taylor Family Historian, cousin Andy Taylor, this is a photo of Terrel Taylor, that appeared in the Tulsa World. “I think the story is that Terrel, at such an early age, collected old license plates and nailed them to an outbuilding at the Taylor house.”

Amazon CEO Jeff Bezos rounded off this year’s shareholder letter with some words from Dr. Seuss. Bezos, quoting the man by his real name, Theodor Seuss Geisel, recalled the following quote: “When something bad happens you have three choices. You can either let it define you, let it destroy you, or you can let it strengthen you.” — Dr. Seuss

The ending of W.H. Auden’s poem, The Fall of Rome resonates today:

Unendowed with wealth or pity,

Sitting on their speckled eggs,

Herds of reindeer move across

Miles and miles of golden moss,

Finally, Mr. Willard Spiegelman writes about the merits of isolation and the simple pleasures of a book. “When I take a book from the shelf, I feel as I do at the theater before the curtain goes up. I am all anticipation. But with reading, unlike watching, I am not a passive audience. I open and close my book on my terms; I reread it when I am ready; I even read the same paragraph twice before proceeding. Pacing is everything: Stop and go, hover and resume. It all feels self-indulgent, even vaguely criminal. I can recall the secret childhood gratification of reading with a flashlight, under the covers at home or summer camp, after “lights out.” This was my version of bad behavior. Isolation has its merits.” Willard Spiegelman, WSJ April 13, 2020