My daughter Lauren has an ear tag from birth about the size of an uncooked lentil. At the age of four, she informed her two younger siblings that her ear tag was Cherokee Indian…the rest of her was Pilgrim. My understanding of my own Native Indian heritage is apparently less considered.

During my four years of living and working near Tabernacle, New Jersey, where my wife was raised, the question of my roots would invariably arise given my speech inflection. A co-worker referred to me as Tom Bodett of Motel 6 radio commercial fame…”I’m Tom Bodett for Motel 6, and we’ll leave the light on for ya.” My hickish speech inevitably led to the question of my origination. When my New Jersey friends discovered that I hailed from Oklahoma, the sheltered and parochial Easterners who believed the center of the universe to be Trenton, NJ, would ask, “Are there lots of Indians in Oklahoma?”

It took me aback, made me question how the rest of the world viewed the real center of the universe, the Great Plains of these United States of America. To those original Native Americans who once occupied my home, (Oklahoma means Red People) this was the center of the universe two hundred years ago when they dictated policy without government law. The only law of the Great Plains was the law of the warrior and horse, the law of the buffalo herds and the law of plains wealth measured not by land ownership, but by the number of horses owned. Great black clouds of buffalo moving en mass across the plains provided sustenance. Mustang derived from Spanish explorers in the 16th and 17th centuries provided the tool to effectively hunt the buffalo, and to subdue other humans less adept at horsemanship and archery. The Comanche tribe was the dominant tribe of the Southern Great Plains before the technology of the Colt six-shooter and Henry repeating rifle changed the balance of power after the Civil War. 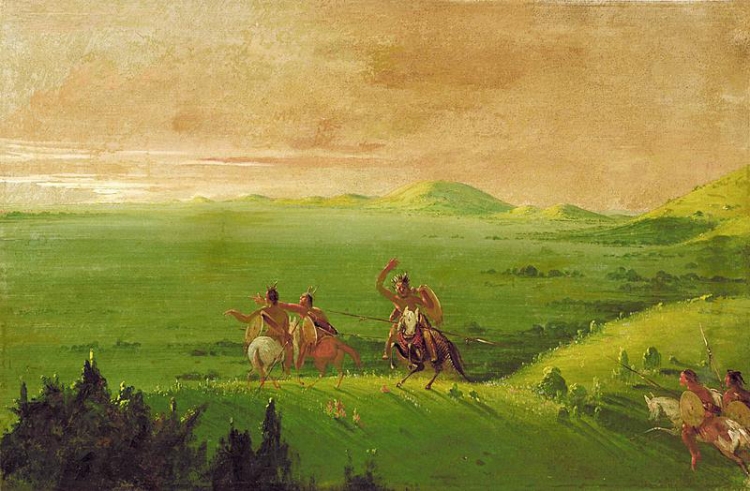 I just finished reading Empire of the Summer Moon-Quanah Parker and the Rise and Fall of the Comanches, the Most Powerful Indian Tribe in American History, by S.C. Gwynne. A proud nomadic warrior culture, the Comanche were fierce, despised by white settlers and Indians alike. The reason Tonkawa Indians often scouted for Union Army troops patrolling the west was vengeance. They hated Comanche Indians…and I could still hear this tone in the voice of my new Delaware/Cherokee friend. I was standing in the kitchen of a new townhouse I hoped to lease to her, when she said, “The Comanche were just mean!” Her blood tribe is Cherokee and Delaware. She’s moving from Colorado where she works with Utes and Navajo. She moved away from Bartlesville, at the age of twelve, and commented about how odd it was to be back after so many years. We talked of old days, reeling off names and memories. She’s coming back to work with her tribe of birth, the Delaware. I mentioned to her that I’m 1/256th Cherokee, good enough to get on the Indian Roll. My brother is on the roll, but I haven’t signed on yet. Maybe it’s the 255/256th guilt pulsing through my veins. The same guilt that forms public policy making many Native Americans lifetime annuitants. According to my friend, “Utes collect $65,000 annually, just for being Utes”.

But the Comanche were at one time the most powerful of the Southern Great Plains horse tribes, which included the Kiowa, Arapaho, Osage, Pawnee, Apache and Wichita. They formed a barrier to settlement from San Antonio and extending on a line through Austin, Ft. Worth, Oklahoma City and Wichita. Their territory spanned 240,000 square miles and encompassed nine major rivers, Arkansas, Cimarron, Canadian, Washita, Red, Pease, Brazos, Colorado and Pecos. They roamed Kansas, Oklahoma, Colorado, New Mexico, Texas and even deep into Mexico. The Comanche knew nothing of the political structures of European empires, nor did they understand land ownership, although they ruled the grasslands outright until their demise and acceptance of reservation life in 1875.

Courageous or naïve white settlers who ventured beyond this line and onto the ocean of grass, beyond the shelter of trees and American military protection, paid with their lives. One such family was the Parker family who built a stockade and family settlement west of Fort Worth. One day in May 1835, a band of Comanche warriors rode up to the open gates of the Parker stockade. They killed several members of the Parker family and kidnapped two children and two adults including nine-year old Cynthia Ann Parker. Cynthia Ann Parker watched many of her kin die including her Father, then she was strapped to the back of a mustang riding north through northern Texas and into what would become Oklahoma. She would marry a Comanche warrior at the age of fifteen and assimilate into the Comanche tribe. Her son, Quanah, would become the Chief of the Comanche tribe. In 1875, after killing untold white men, he would lead the remaining remnant of Comanche to their ultimate fate, a settled existence on a reservation in the shadow of the Wichita Mountains in present day southwestern Oklahoma. Just as Quanah’s mother, Cynthia Ann, assimilated into the Comanche way of life, he would assimilate in reverse, into the white civilization of land ownership and cattle and laws. Quanah, the legendary Comanche warrior, the son of a white woman and a Comanche chief, Peta Nocona, would become rich by Comanche standards moving into a ten-room American style home called Star House near Fort Sill, where he would die in 1911, a revered western icon. Quanah was a remarkable man giving away most of his possessions to fellow tribesman before he died. He traveled to Washington D.C. on several occasions to petition congress on behalf of the Comanche, he entertained President Teddy Roosevelt at Star House and hunted with him on the reservation. This man who killed white settlers had become a taxpaying citizen, a respected part of the white culture and the American nation that destroyed his Comanche way of life. 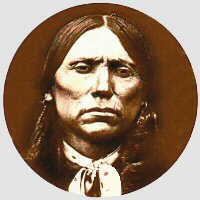 Enjoy the book if you have can, it’s a great read. Tribute to the author, S.C. Gwynne, that my disdain is equal towards violence of both Indians and Whites, both seeking to sustain or advance their territory and way of life. Both sides were brave and tenacious, both sides were brutal, cruel and barbarous. The Comanche made war on everyone without discrimination, Indian, White, Mexican and mixed breed. White settlers with military aid pushed Indians inexorably west just as they had the Five Civilized Tribes earlier in the 19th century. It’s a narrative filled with violence, blood and gore. But when has humanity not excelled in that sport? What I found fascinating was the longing for a new home and the religious fervor and perceived God-ordained rights wielded by white settlers as license to push Native Indians west. Just as fierce was the passion of the Plains Indians to protect and secure their home, their lives and their traditional hunting grounds.

Amazingly, Cynthia Ann Parker, mother to three children with Peta Nocona, was “rescued” in an army ambush at Pease Creek. Federal troops killed Peta Nocona and Cynthia Ann Parker was taken back to white civilization where she lived out her days in misery. She tried running back to her Comanche tribe repeatedly, although she was always caught and returned to her various homes “for her own good”. She would die proud but heartbroken, eventually refusing to eat she was so despondent. Her uncle spent ten years searching for her before the Battle of Pease Creek and her return to Parker kin. If the story sounds familiar, John Ford based his movie, The Searchers, on the story. John Wayne played the tormented Uncle James Parker and Natalie Wood played Cynthia Ann Parker.